I never thought of myself as a person who would buy into “tools” that allegedly help us more effectively manage our thought processes. I used to think that these were just a waste of time that could probably be done with. However, after our Health Informatics course asked us to make use of a “mind map” to plot out the barriers to EMR adoption, I can kinda see myself using this tool more often. (Operational word: Kinda)

As with any project, our first step was to identify the problem at hand. This was pretty easy as the question was given by our professor outright – what are the barriers to EMR adoption in the Philippines? The next step was to find the relevant material and gather the needed information to answer this question. As seems to be the case in this “information explosion” era, there were tons of  material regarding the topic. But, and this seems to be the case for most of the time as well, sifting through the material to find the locally relevant ones resulted in a search result of – 0. This seems to be a trend that I am encountering more often as I go through the Health Information System here in the Philippines. I decided to just settle for foreign data first, then try to see which ones were applicable in the local setting.

To find  the best material quickly,  I went through pubmed and searched for a meta-analysis that integrated the studies on E MR adoption. Thankfully, there was one fairly recent, well written and well executed study by Albert Boonstra and Manda Broekhuis. A big plus was that the study was available under open access! (I should probably reserve my comments on the “openness” of scientific journals in another blog post.) This study not only listed the factors that were identified in the individual studies, it also attempted to create a taxonomoy of the factors.

Feeling fairly creative, my groupmate (ArtRN) and I decided that we could group the factors down to four big divisions and build our own taxonomy as it were. We then went right for it and identified which factors were applicable in the Philippine setting. After a few hours on Mind Meister, we were able to come up with our mind map:

From my perspective, this mind map revealed at least one compelling detail regarding the EMR adoption in our country – a lot of factors are heavily concentrated on the “People-ware” group. Art and I decided to highlight this further with the use of arrows. Seems like the strategy of  for health information system should follow what companies in other sectors have articulated a thousand times over – always having the user in mind and you’ll get it right. I think this is an important point that anyone wishing to increase the adoption of any health information system should understand. The financing, the infrastructure, the political will are all very important factors to consider. But at the heart of it all is the user. We could get every other factor right and still have the whole system fail if we do not engage the most important factor of all – the people.

A side note on Mind Meister since I started this blog post with a paragraph on the use of the mind map tool. Mind Meister is very easy to use. The learning curve is  not steep at all. Sure the interface is not yet as intuitive as I would like it to be (took me a few minutes to figure out how the connectors work and how to delete an idea), but once you get it, you’ll be mind mapping all night long. 🙂 Give it a try and see if mind mapping is a tool that’s right for you.

The first output required of us by our Health Informatics class was an infograph explaining the roles of government and free market in the Philippine Health Information Network/Infastructure (PHIN/PHII). For this assignment, the class was divided into several groups. Our group was tasked to explore the role of government in building the PHIN. The PHIN is a consortium of agencies whose aim is to develop a single national medical informatics practice. The infrastructure (people, technology, etc.) needed to accomplish that goal is the PHII.

To accomplish this task, our group launched into reading the voluminous material that we got regarding eHealth, the government’s digital strategy, the DOH’s PHII framework proposal as well as some papers on the Philippine Health Informatics situation. While reading through the material, one thing became evident to us – a lot of them identified different factors that affect the PHIN and almost all of them gave a qualitative assessment of the current situation. However, only a few of the resources gave quantitative data on the matter. Personally, I was a bit disappointed as I would have loved to see more numbers. Why? – Because most of the infographs I’ve seen utilize the quantitative data to make the “graphics” part of the infograph. It is, after all, easier to make a visual representation of say “30% of the population have use the internet” compared to “only a few use the internet”. Given this hurdle, our group decided to look for other sources, but to our dismay, we were unable to find more relevant quantitative data. It was at this time that one of the problems that the PHIN is trying to solve became evident to us – access to information.

Nonetheless, we tried to work with what we had and made the first iteration of our infograph. Our approach to the task was to ask key questions and give the answers that we found from our readings. We did this with the following parameters in mind:

1. Topic of Infographic – The role of government in the Philippine Health Information Network

Here is the first version of the infograph.

As you can see, it doesn’t look much like an infograph. Our initial idea was to present it in a “network graph” kind of way. But it didn’t really work out that good. One of my group mates commented that it looked more like a solar system of sorts. I thought it looked like a fungus on a petri dish. Our professor correctly pinned down what this bunch of circles, lines and words was – it was more of a mind map than an infograph.

I have to agree. This really did look like a mind map. For our revision, we did away with the “network graph” idea and instead outright listed down the questions and answers. Here is the revision of that infograph. 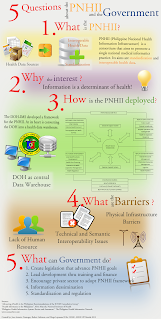 Now we were getting somewhere. At least the main ideas were there. And – it didn’t look like a fungus anymore! But I still had a couple of problems – 1. I didn’t like the color scheme. And 2. It still seemed too busy, that is, some ideas could still be compressed. Taking to mind that our target audience was the DOH secretary, we distilled the content even further. After taking into consideration the two issues identified above, here is the third version of our infograph. 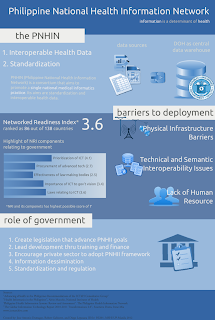 It’s still a bit busy and heavy on words, but I think it’s concise enough for the busy DOH secretary. We reduced the topic to three main subtopics – a description of the PHIN, the barriers to its deployment and the tasks that government can do to advance the PHIN. We also did away with the big and clunky PHII framework. We felt that it contained too much information that it could probably have its own infograph. Also, our audience was the DOH secretary and the PHII framework was developed by the DOH. So we figured he could easily get that information from his staff.

What we did highlight was the results of the Global Information Technology Report 2010-2011. While some may argue that this report elaborated on the Information Technology sector as a whole and did not focus on the PHIN, we believe that the report tackles a subject that is intimately related to what the PHIN wishes to accomplish. Furthermore, it is this report that had the the most detailed information on the role of government. This report highlighted that the government actually placed a high value on ICT, where the Philippines got a rating of 4.1 out of a perfect score of 7. However, what was lacking was the procurement of advanced technology to support that goal (2.7) and the effectiveness of our law-making bodies (2.5). This rings true. Whenever politicians talk about advancement of health, education and technology, I hear all the support and praises that the vocabulary could give. However, there seems to be a disconnect between what the government is saying and what it is doing. I think it’s time to put the money where their mouth is.

On the bright side, I hear that the most recent budget proposal gave importance to education and infrastructure spending. So we might be heading to the right direction. (Relevant articles: here, here and here.) I do hope that they include ICT infrastructure in the “infrastucture” budget. And as to the most important factor of all – the Filipino people – the government says that it’s investing in this best asset with a third of the budget going into social services. I have my opinions on that matter but I’ll reserve that for later.